No requirement for cooling treatment or raising seedlings under cool temperature, and hoping to expand new market share 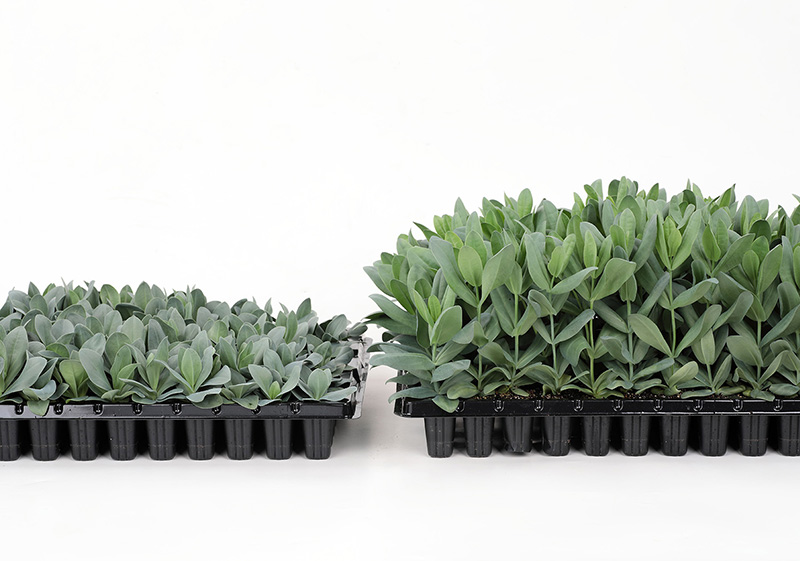 Sakata Seed Corporation has developed a new type of Lisianthus which is highly resistant to rosette*1. (=left photo: traditional varieties, right: less rosette risk type). It has been developed by the patented technology.*2 Lisianthus rosette is a physiological phenomenon when the seedlings are grown under high temperature conditions, and it has been a serious issue for the growers in Japan and overseas, because the rosette plants lead to the loss of cut flowers, quality deterioration, and longer cultivation periods due to delay in production. In Lisianthus production in Japan, it is common to use cooling treatment of the seeds*3, cooling treatment of the seedlings*4, or raising seedlings under cool temperature *5 to prevent rosette at the seedling stage under high temperature period from early summer to early fall. However, these methods are high cost and time-consuming because of the requirement for the installation of air-conditioning equipment and precise temperature control depending on weather conditions. Since the less rosette risk Lisianthus variety does not require such methods, it contributes to reducing facility costs and saving labor management. In subtropical regions of Asia, some production areas are severely affected by rosette due to the lack of cooling facilities, however this less rosette risk variety can contribute to reducing the rosette issue and to improve the productivities of cut flowers.

Also the less rosette risk Lisianthus has advantages for production areas where second flush harvest*6 is shipped as well. Even if cooling treatment is implemented to prevent rosettes, it does not effect the second flush harvest. Generally, the second flush flower is grown under high temperature, short day length, or other rosette-inducing conditions, therefore the chemical application is required to promote bolting *7.

Since the less rosette risk varieties are genetically resistant to rosette, it affects continuously even during the second flush flower, then it can be expected to reduce chemical costs and programmable shipments.

As a leading Lisianthus breeding company that has developed a first pollen-free Lisianthus in the world and other innovative varieties, we will continue to develop the varieties to solve the issue in Lisianthus production.

The advantages of the less rosette risk Lisianthus, which fundamentally solves the rosette issue.

In Japan and overseas, rosette had become a problem mainly in the 1990s to beginning of the 2000s. Subsequently, technologies have been developed to prevent rosettes by using cultivation techniques such as cooling treatment and raising seedlings under cool temperatures. However, precise temperature management at seedling stage is one of the challenges in Lisianthus production, which requires thorough temperature control. We would like the growers to make more secure Lisianthus production.

As a top Lisianthus breeding company, we have been proceeding research and development for long years in order to solve this rosette issue through the characteristics of our varieties, even though the cultivation techniques have become common to prevent the rosettes in Lisianthus production.

The less rosette risk variety is expected to save growing cost in Lisianthus production, especially in energy costs, which has become a major issue in recent years. Moreover the development of this variety has the potential to develop new production area where this has been difficult in Lisianthus production due to the demand for capital investment and complicated cultivation management. We hope that the development of this variety will further expand the Lisianthus market.

Test results of Lisianthus plug seedlings on the number of bolting.

※Reported by the Center for Environment, Health and Field Sciences of Chiba University.

Lisianthuses in a various event scenes

Because of their gorgeous appearance and long vase life, Lisianthus are widely used at important ceremonial scenes and other events in Japan. Overseas, there is a high demand for home-use market that can be displayed and enjoyed at home. At the Royal Flora Holland in the Netherlands, the leading flower auction in the world, mentioned the volume of Lisianthus distribution is increasing, and the trading volume has become sixth position next to Roses, Chrysanthemums, Tulips, Lilies and Gerberas (based on sales at FloraHolland in 2020). In recent years, gorgeous large, double, fringed flower varieties have become increasingly popular worldwide. 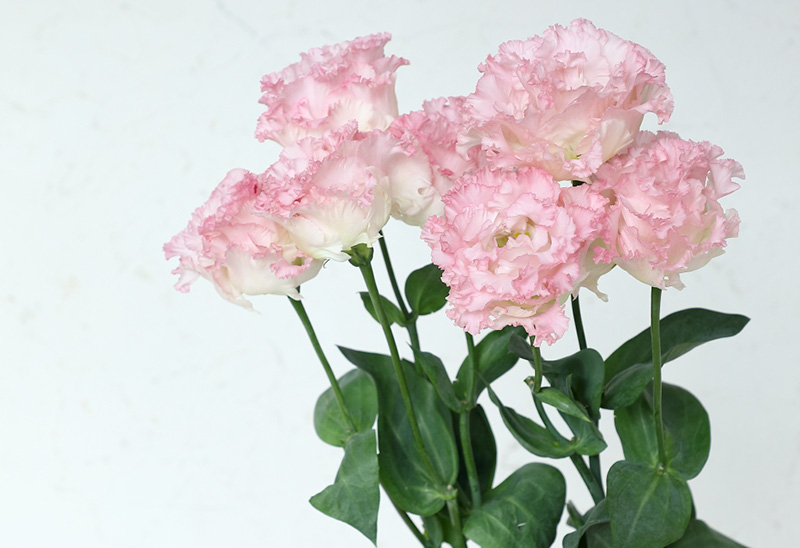